You dump it, we pump it!

Porta-Potty Holding Tanks: What They Are and Why They Matter 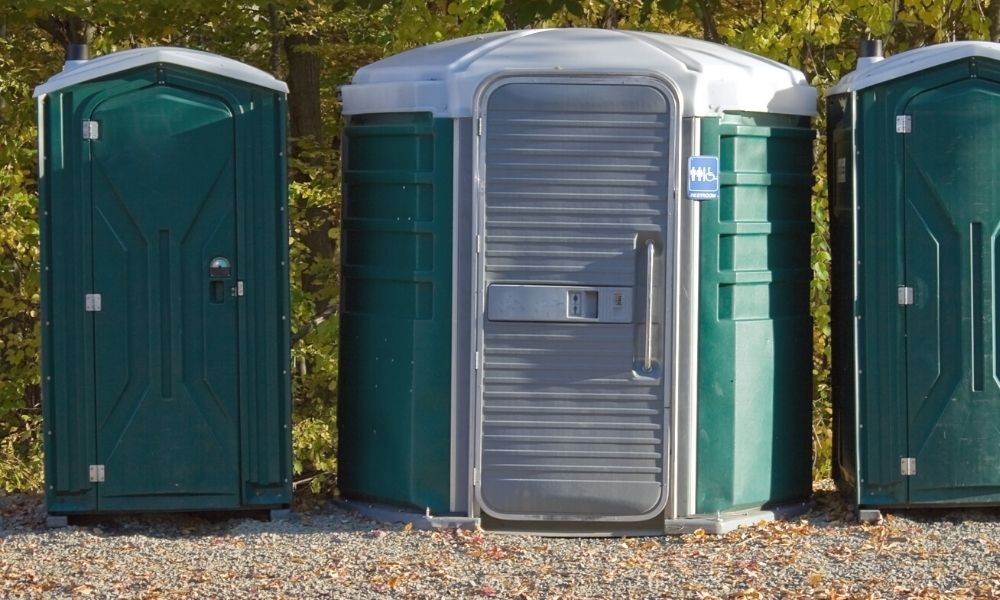 Everyone must go to the bathroom at some point. If you’ve ever been to an outdoor concert or festival, you’ve probably had to use one of those portable restrooms you see lined up in rows. You’ve probably noticed porta-potties at construction sites. Try as you might, you’ve also undoubtedly looked inside the toilet only to see a weird, viscous blue liquid staring back at you. That blue liquid is part of a system called the holding tank inside the portable restroom designed to handle the diverse types of waste below. If you’re curious about what porta-potty holding tanks are and why they matter, continue reading below.

The first physical evidence of people using portable restrooms dates to ancient times. Archaeologists found the relics of chamber pots for people to bring into different rooms. The matter inside these chamber pots would be disposed of at the person’s discretion. Fast-forward to the 20th century, and early prototypes of porta-potties known as Elsan chemical closets were being used among soldiers. These chemical closets were not well-liked by the people using them, as they were cramped, not flushable, and used blue chemical tablets with a stench so strong it lingered in the vehicle transporting the portable toilet. Once the war was over, companies set to work developing more practical portable restrooms for civilians. These designs shifted from wood to fiberglass to the plastic models commonly used today.

What Is That Blue Liquid?

The blue liquid you see resting at the bottom of the porta-potties can seem so strange. There are few substances like it that you’ll typically encounter in your day-day-day routine, making it even more surprising to see. The blue liquid comprises several ingredients that help keep portable restrooms functional despite accumulating numerous gross materials over time.

Biocides are the front line of defense against harmful bacteria that can collect as waste begins to stockpile. Biocides will help to block the growth of odor-inducing gram-positive bacteria often found in sewage. Gram-positive refers to any bacteria with sturdy walls, but that are easier to destroy than gram-negative bacteria. Preventing these types of bacteria from multiplying helps keep porta-potties smelling fresher for a more extended period.

The blue color in the depths of porta-potties is achieved by dying the liquid blue. The primary function of this dye is to mask the visuals of waste that build up. If the toilet does not become overfilled, the liquid will cover the top of the unsightly materials.

Fragrances are chemicals used to cover up the harsh smells that accompany waste and replace it with more pleasing scents. These fragrances are usually up to the discretion of the company that owns porta-potties.

How are Porta-Potties Serviced

You may be wondering how they get all that blue liquid inside of the porta-potty. It’s all part of the process that most porta-potties go through when they’re serviced by sanitation staff. Sanitation staff attach a vacuum directly to the holding tank or output drain. The vacuum collects waste and transports it into a tanker truck complete with a waste disposal unit and a smaller tank of fresh water. Staff then fill the porta-potty holding tank with fresh water, and the blue liquid solution after the waste is collected. Then the sanitation workers will spray and wipe down all surfaces with a disinfectant and clean out any remaining debris that might be lurking on seats or other exteriors. Finally, they will restock supplies such as toilet paper, paper towels, hand soap, or anything else the porta-potty might need.

What is a Holding Tank?

Holding tanks, also known as septic tanks, are tanks located near portable toilets. Their main purpose is to store the wastewater and other sewage materials that discharge inside the portable restrooms. These tanks are usually made from polyethylene material and extend the time between emptying each unit. With a holding tank, porta-potties can go days between needing to be drained of waste instead of hours.

When Do You Need a Holding Tank?

Holding tanks are essential to the function of a porta-potty, so you should always plan to include one when you know it will be used by people throughout the day. They wheel in the holding tanks when they install the porta-potties. The holding tanks can be attached to multiple units at a time to save space and money. They can also remove the need for running sewage when the waste pumps out of the toilets. They also have the added benefit of keeping unpleasant smells to a minimum when you set up your porta-potties in a hot location or you’re expecting warm weather. The porta-potties tend to heat up in the sun, and without a holding tank to pump out waste, it will begin to smell worse more quickly than it usually would.

Why Do They Matter?

If you choose not to use a holding tank with your porta-potty set up, you might quickly run into problems as the waste builds up. Suppose you are unable to remove this waste swiftly and consistently—odors would become overwhelming, and the toilet would be nearly overflowing with waste and therefore unusable. If you are trying to make a good impression on your guests, unusable and foul-smelling toilets can rapidly sour their moods.

Holding tanks can range from small 5-gallon portable tanks to 500-gallon behemoths. The size you will want to use will depend on your mobile restroom needs. If you’re going camping in the woods over the weekend with a couple of friends, you won’t ever need more than the 5-gallon tank. If, however, you’re setting up portable toilets for a large outdoor gathering such as a corporate event, festival, or wedding, your storage needs will be far greater. When you are attempting to rent portable restrooms for your event, you should have a near-exact number of expected guests in mind. While a single porta-potty can theoretically service hundreds of guests a day, you should prepare to accommodate more people with lots of porta-potties, thus increasing the number and size of the holding tanks you’ll need. Being prepared is always ideal.

Knowing what holding tanks are and why they matter is important whenever you are considering portable restrooms for events or worksites. When you know you’re ready to rent a porta-potty, Royal Flush has a variety of options, including porta-potty holding tanks, to fit your needs. If you have any questions or need a quote, feel free to contact us.

Paired with every Portable Toilet rental is Floods Royal Flush commitment to great service and a cleanly atmosphere you deserve. Give your guests the finest porta potty services for your next event. Floods Royal Flush is proudly a family and woman-owned business.